You’ve probably noticed that I’ve rarely posted new recipes lately. I often hike on the weekends, and during the week I am stretched in all directions and get nothing. In addition to the work-home relationship, I have been volunteering for two nights a week for some time. With the arrival of warmer days, the garden is another item that demands my time. In such an overbooked week, something just had to fall off. The blog spontaneously fell into the background. Whether it’s satiety, lack of motivation or just a lack of time, it’s hard to say.

I have wanted to try Soparnik since they did it in the show 3,2,1 peci, but at that time I didn’t have chard in the garden. Then recently Diana reminded me of him again. And in the garden chard! I didn’t pick it on purpose when she was young, I let her grow a little older, because I remember them saying on the show that soparnik is not made with young chard. When I went to the garden to pick chard, the ladybug came to wish me luck in making the first soparnik. I worked according to Diana’s recipe, with minor modifications. Everything in the making went smoothly and the taste was fantastic. We ate the first one warm, and I let the second one cool down (just while I was taking pictures of it) and it was even tastier. The only thing that seems to me is that she may have been rolling out the dough too thinly, since the green of the chard can be seen through it. 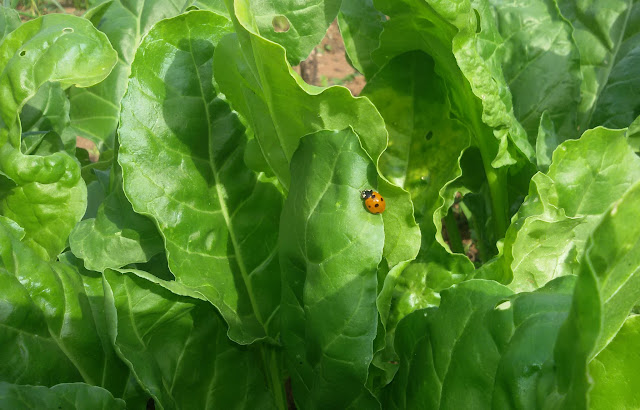 Sift the flour onto the work surface. Add salt, olive oil and 150 ml of lukewarm water and knead the dough (add a little more water if necessary). Form the dough into a ball that you divide into 4 equal parts. Shape each into a ball, coat with oil, cover with a glass bowl and let rest for 45 minutes. Meanwhile, prepare the filling. 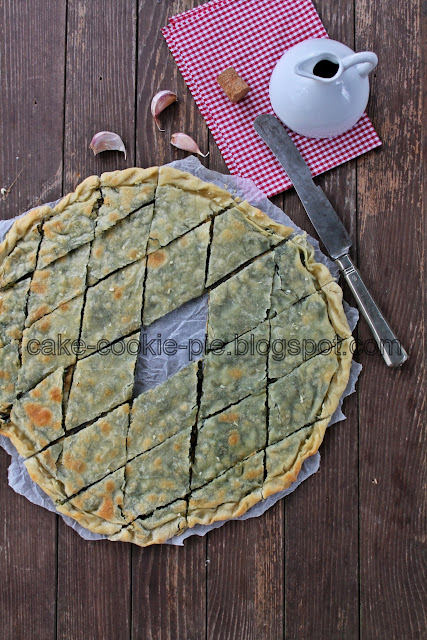 The chard should be well dried, so wash it for a few hours before preparing the stuffing and spread it on paper towels to soak up the water. Cut the green part of the chard leaves into strips. Add finely chopped onion and parsley. Add salt, olive oil and mix well.

When the dough has rested, take one ball of dough and roll it out in a circle on a floured surface with the help of a roller, 2-3 mm thick. Spread half of the chard filling on the dough, leaving the edge of the dough without the filling. Roll out the next ball of dough in a circle and place over the filling. If necessary, cut off the excess dough. Use your fingers to connect the upper and lower part of the dough and pinch to make a decorative edge. Lightly flour the top of the dough and cover with baking paper. Place the rack (from the oven) on the paper and turn it over so that the bottom side becomes the top. Bake for 15-20 minutes in an oven preheated to 220 ° C, until lightly browned. If the dough starts to swell during baking, pierce it with a knife in a few places. Remove the baked steamer from the oven and turn it over by turning the bottom up. Remove the excess flour and coat with the olive oil in which the garlic is pressed. Allow to cool then cut into lozenges. From the remaining dough and stuffing, bake another steamer in the same way.