i’ve been very inspired by all the beautiful eclairs i’m seeing on instagram, namely the ones at maitre choux by joakim prat as well as l’eclair de genie’s by christophe adam. of course, how could i forget sadaharu aoki’s? his are amazing as well. i don’t think i’ve ever blogged much about eclairs coz i usually shy away from making them. like frosted cakes, they’re not my forte. but i think i’m definitely getting better at this. 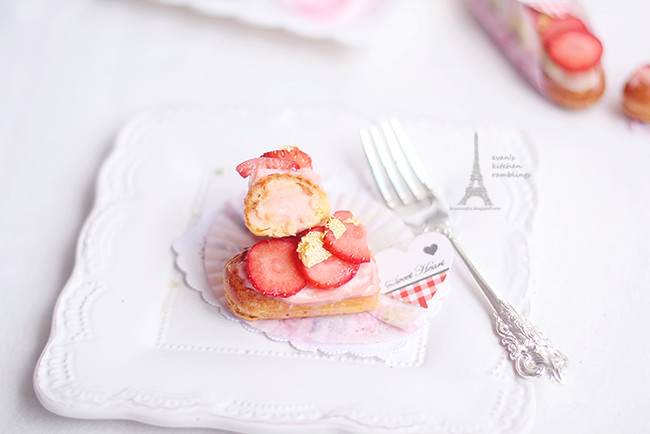 for this attempt, i used strawberry creme diplomat for the filling. i added strawberry puree into the creme patissiere, then folded in creme chantilly. so basically, creme diplomat is pastry cream lightened with whipped cream. and for the glaze, it was strawberry flavored white chocolate ganache. i don’t fancy pouring fondant that much, so white chocolate glaze is the way to go. i also decorated some with a sprinkling of raspberry powder and fresh raspberries. they were soooo good. 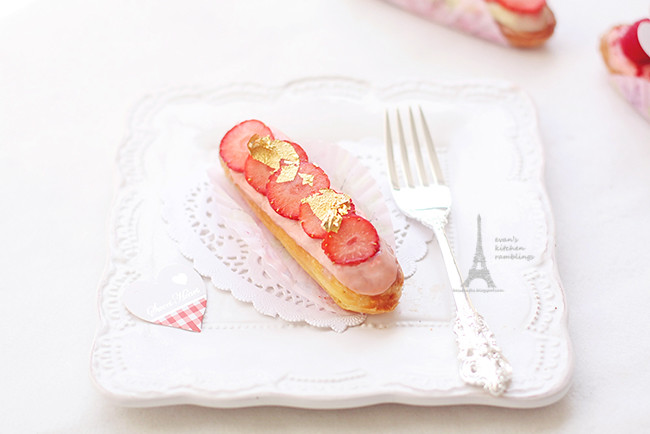 in the past, i’ve always used dorie greenspan/pierre herme’s pate a choux recipe. this time i decided to use chez shibata’s recipe, i’ve had chef takeshi shibata’s book for the longest time and it was only now that i’m beginning to look at it. chef shibata has pastry shops in japan as well as in places like shanghai and bangkok, and his salted caramel eclairs adorned with cubes of butter is one of the best sellers. i think his eclair recipe is far better compared to the others because it uses bread flour as well as baking them on low heat (150C for 55 mins). as opposed to those baked on high heat from the start, baking them on low heat for a long time ensures they’re baked thoroughly so you get really crisp and hollow shells. whenever i try the other methods in the past, my choux would brown too quickly and i get soggy centers. not anymore! i also used a fluted piping tip (wilton 8B) for piping these. using tips like these ensure even baking. if you don’t have such tip, you could get one, or use a fork to score lines after piping. i also like his creme patissiere recipe, it uses cake flour to thicken instead of corn starch. i think the texture is way better, not thick and gluey but smooth and glossy.

recipe is from a book, so i won’t be posting it, as usual. the book シェ・シバタ スイーツのエスプリ can be found on amazon.co.jp.