matcha, vanilla and strawberry soy pudding with dango and syrup

its now spring and of course my favorite season to make spring wagashi and sweets. i actually had intentions to start making spring sweets much earlier but due to lunar new year, my fridge was sooo packed with stuff you wouldn’t believe it. 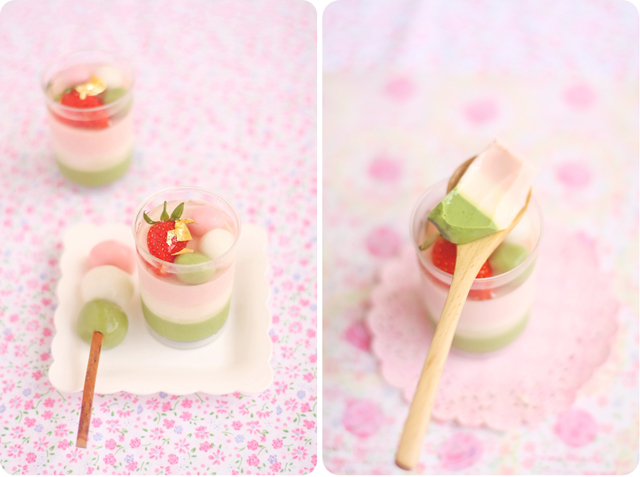 having used many japanese recipes, i came to realize that its not just pastry chefs and cookbook authors that come up with their own recipes, there are actually tons of creations from bloggers and homemakers. this kinda gave me the confidence to come up with something of my own. i don’t think i’m naturally a creative person, so i have never thought of “inventing” my own recipe. the only time i came close was to use recipes from different sources for my matcha black sesame entremet. it tasted great and was a hit among my readers so it caught me by surprise.

this recipe is inspired by the soy milk/tofu pudding commonly known as douhua. locally its often eaten with syrup on top and the variation of soy milk + rice balls is also very popular hence this is like a cross between those two. when i made it i had no idea how it would turn out but it was surprisingly very light and tasty. 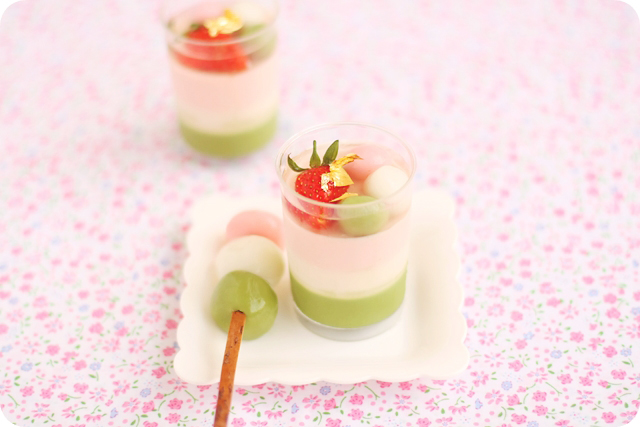 1. heat soy milk in a pot until near boiling. remove from heat add in gelatin sheets. stir until gelatin dissolves completely.
2. measure out 3 equal portions of the soy milk mixture. add in vanilla extract to one, strawberry jam/puree + pink coloring into the other and matcha into the last.
3. divide the matcha soy milk mixture among two cups. refrigerate until firm then pour in the vanilla mixture. refrigerate until firm and finally pour over the strawberry mixture. refrigerate at least 4 hours.
4. to make syrup, heat sugar and water until sugar has dissolved. leave to cool completely.
5. to make the dango, add in both flours + enough water to make a dough. the dough should not stick to your fingers. knead dough until consistency of ear lobe. divide mixture into 3 equal portions and add matcha powder and pink food coloring into the 2 portions. roll into balls. heat a pot of water until boiling then drop the dango into boiling water and cook until they float. immediately plunge them into a bowl of ice water.
6. to decorate, add strawberry halves and dango onto pudding and pour syrup over.