i wasn’t actually going to blog about another buttercream flower cake so soon but these two weeks, i did nothing but practice piping flowers until wee hours in the morning and i had like 3 trays of flowers in the freezer so i was thinking, heck, i’ll just assemble them. after that i can just reuse the buttercream to make other flowers. koreans mainly make theirs in 3 forms – bouquet, wreath or crescent so since i made the bouquet one already, i decided to tackle the wreath one. its pretty nervous wrecking since i have not made anything remote similar. good chance to practice the placement, i think. 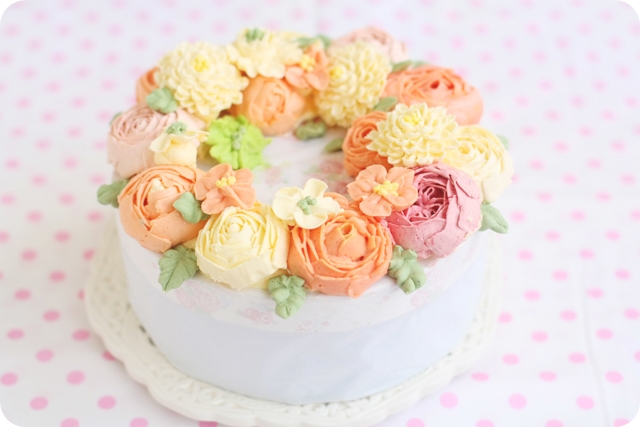 for two weeks i practiced piping several flowers – chrysanthemums, closed-type rose (or is it ranunculus), apple blossoms, austin/juliet rose and carnations. the carnations didn’t turn out very well and mine turned out looking like a brain instead so i guess back to the drawing board. i actually wanted to use a styrofoam cake dummy but the shop didn’t carry a small size so i ended up using one of those boxes i bought from daiso and covered it with greaseproof paper. didn’t do such a good job wrapping it because the paper was so flimsy but i guess this will have to do since i have no interest in baking and torting a cake now. 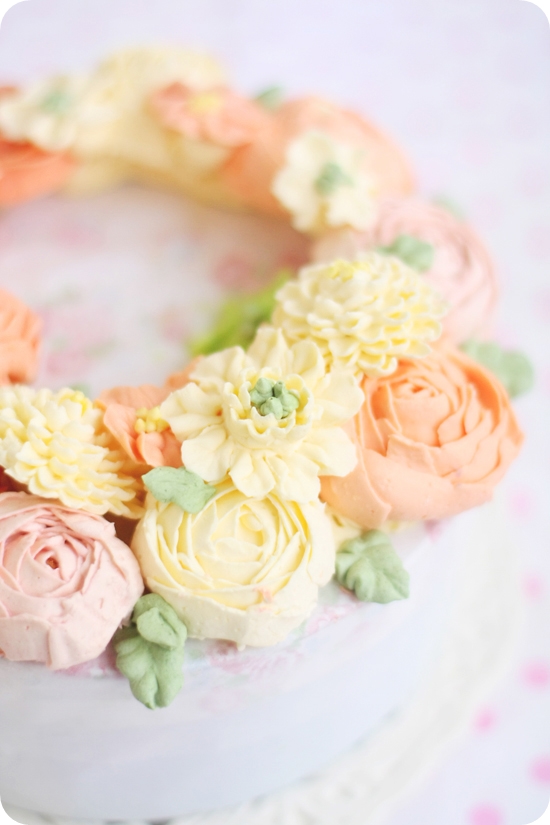 i have no idea what this flower is but i see it a lot in korean buttercream cakes. i downloaded countless pics as references and they’re all so beautiful! this, as well as the chrysanthemum turned out to be my favorite flowers. next time round, i intend to learn how to make the buds/baby breath kinda flowers. i also want to make them in different tones ie. darker centers so they’ll look more realistic. but overall, i’m pretty happy with my second attempt, consider i’ve only picked this up weeks ago. i like to think its possible to learn it without going for a class. it seemed to be a closely guarded secret regarding these elusive korean type buttercream flowers since we can hardly find any info on the internet. the class in korea will cost anything between $500 to $2500 depending on the complexity of the flowers learned and topics covered. i’m not going to spend the kind of money to learn how to pipe flowers so i guess it will have to be self taught, as with all my other bakings.