frankly, i would not have thought of making chocolate bonbons and pralines until a girlfriend got me a box from la maison du chocolat on her holiday. they were so good that i felt i should give it a try sometime. previously i had been pretty intimidated with chocolate tempering and even after i succeeded i just stuck with making decor coz they’re easier to handle. this time i worked with a larger batch of chocolate so they’re not so easily overheated. 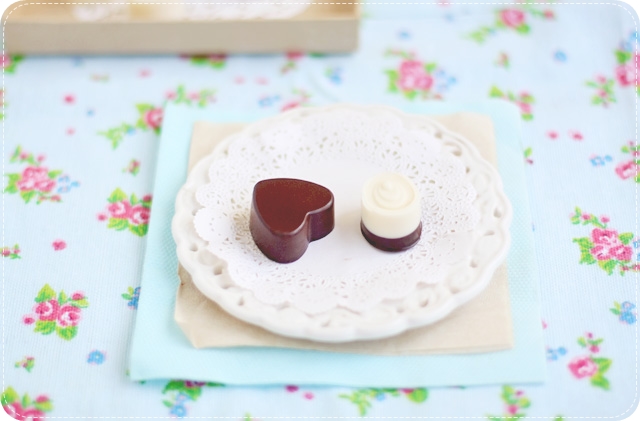 as an amateur i felt that i wasn’t ready to use professional acrylic molds hence i used silicon ones. the chocolates would much easier removed without any banging on the countertop. while shopping for the silicon molds i think i may have bought an ice cube tray by mistake instead, as seen on the heart shaped ones coz they’re much bigger but i think they work just as well. i used the seeding method for this and jacques torres, the master chocolatier himself provided a really good tutorial and explanation on chocolate tempering. the video has disabled embedding so i can’t embed it on my blog, do watch it here on youtube.

judging from the shine and hardness, i think i’ve succeeded in making bonbons! next time i will try filling them with caramel and ganache 🙂 happy easter everyone!